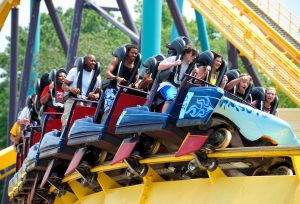 Are you sick and tired of going to the same old attractions? Whether it’s the south coast or Scotland, there is something for the entire family and some of these attractions you might not even know about. If you’re planning a large group outing, you might consider private minibus hire to get you all there. If you want to find out a few lesser-known attractions, then continue to read on.

Dreamland is one of the most popular parks in the area and it has recently undergone a multi-million pound restoration and upgrade. The thrill park now includes impressive rides such as double decker carousels, caterpillars and the chair-o-planes, as well as a number of modern-day rides. We guarantee you will have a blast on the twirling tea cups. If you plan on going to Dreamland in the late summer, then we strongly suggest going on the Scenic Railway, which will provide you with some of the most impressive scenery you’ve ever seen.

This is a popular attraction that lets kids become many things in a make-believe world, including pilots, singers and firefighters to name a few. There are dozens of role-play activities for kids to take part in. This includes battling crime as a law enforcement officer or working in the financial management industry and much more.

This is a 4D bus ride that everyone will love. Shrek’s Adventure will have you exploring the swamp and checking out over eight magical lands, where you’ll meet some of the most well-known characters such as Puss-in-boots, Gingy and many others. However, we do recommend booking as soon as possible because slots do fill up fast.

The M.33 will be heading to Portsmouth Historic Dockyard this August, and you’ll be able to see it alongside the HMS Mary Rose and the HMS Victory. The ship was launched back in 1915 and it is now the only remaining British ship of the Gallipoli Campaign. It’s also the only British warship from WWI. Everyone of all ages will love touring this, but kids especially will love being submerged in the battle experience. Even better, everyone will receive a history lesson on the ship’s past, so it is also a learning experience people will get when they visit.

A re-creation of Six Eastern Asian islands will be opening at Chester Zoo later in July. You’ll have the chance to view animals that are native to Sumba, Papua, Panay, Sulawesi, Sumatra and Bali. Not only will you get to view animals, but an array of carnivorous plants, as well as birds that look like they are from the pre-historic ages.

Over in Winkhill is where you’ll find Peak Wildlife Park, which is England’s newest wildlife park. They have everything from wallabies to lemurs to penguins and more. There are several interconnected animal experiences within the park, and animals from three continents can be found here. The park is cheap too, as kids can get in from £5.95 and adults can get in for £7.95.

This aqua park is an outdoor park that is the first in the UK, and it sits on 50 acres. It opened its doors back in May and anyone at least six years old and at least 110cm in height can enter and go on rides. You can do a lot here, such as go on the see-saws, slides or jump around on trampolines. There are many other things you can do here, including fishing, wake-boarding and water skiing.

Last on the list is Thomas Land. There is no shortage of rides here, and there is the Sodor Airport complex you can go to and take in impressive views of the surrounding area, including the park. Make sure to check the calendar on the website to see what events will be held there in the future.

Adding Antiques to Your Home Is a Smart Move

Look for the Right Option for Curtain Buying Needs